Welcome to a new era in capturing personal moments.

Congratulations on choosing a better way to take selfie photos and video with your new AIR NEO from AirSelfie. This manual will help you get the most out of your AirSelfie experience. We recommend that you read through it in its entirety before taking your AIR NEO on its first flight.

section at: www.airselfiecamera/airneoum. Support for additional languages is coming soon. You will also find answers to most of your questions about your new AIR NEO on the SUPPORT 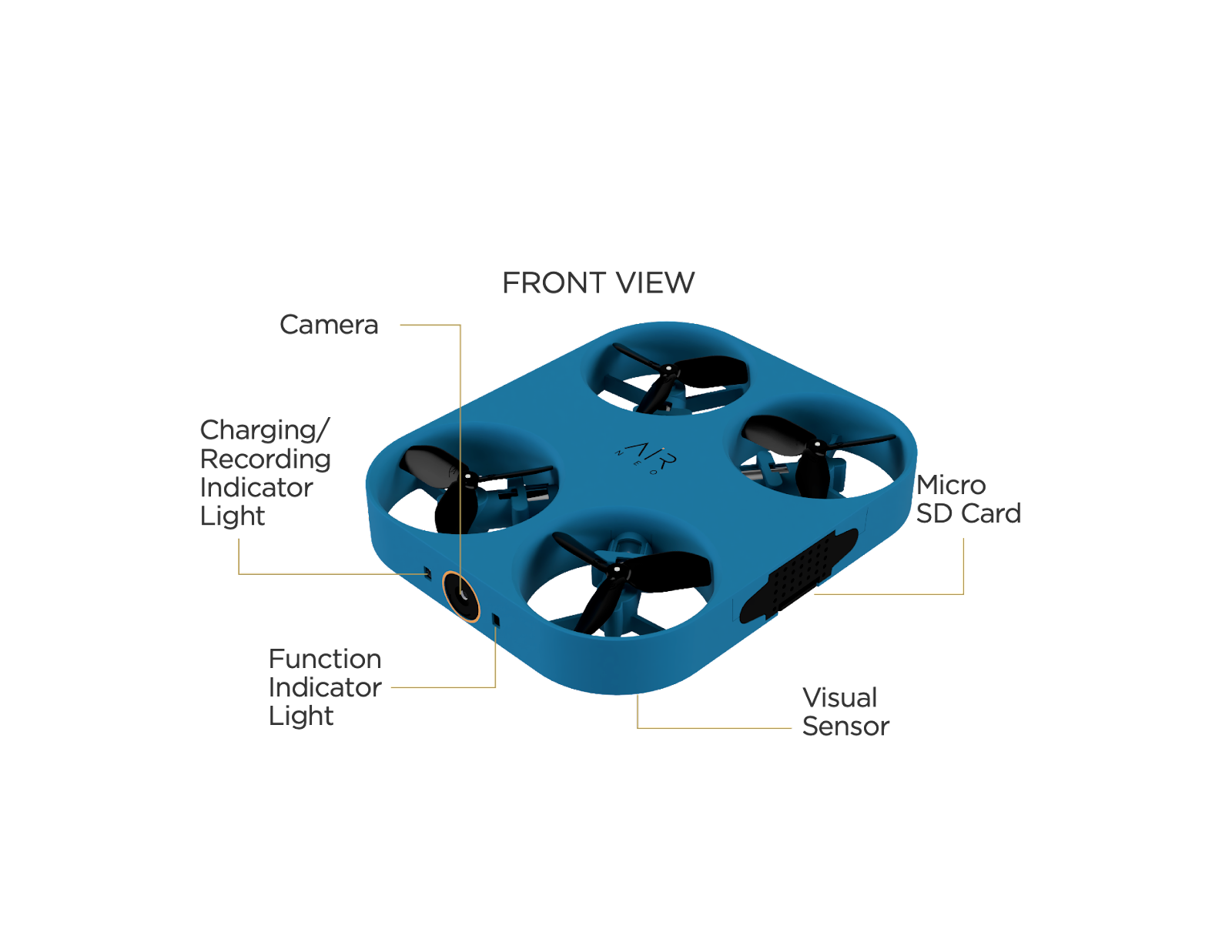 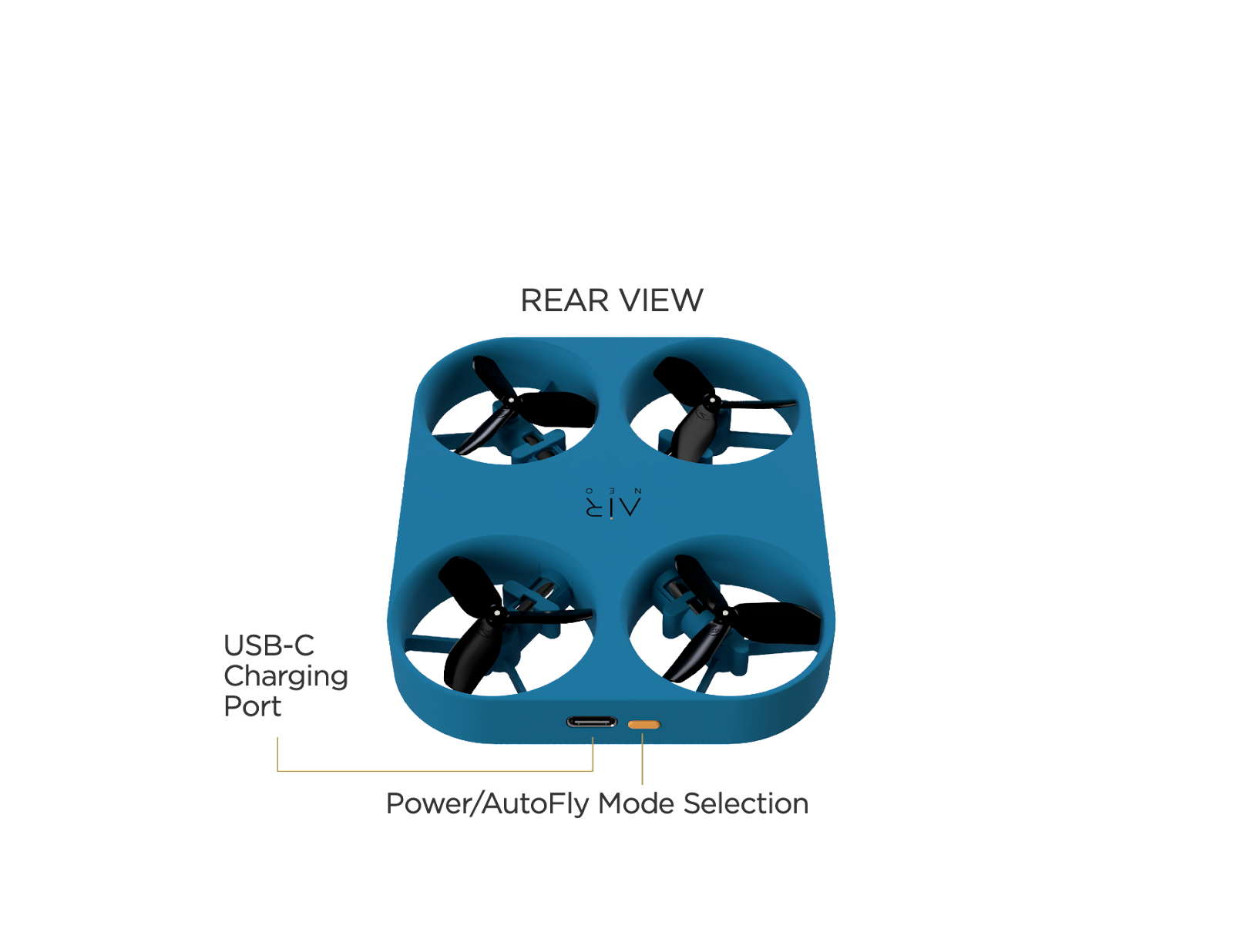 The universal AirSelfie App features “One-Touch” intuitive simplicity. iOS users can find it on the App Store and Android users can download it from Google Play for free. 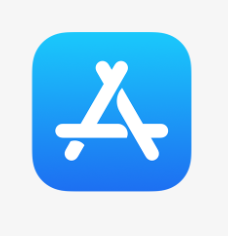 Your AIR NEO comes with a partial charge, so you are good to fly right out of

the box. The average flight time of a full charge is 6 minutes. It’s easy to recharge NEO’s battery using the USB-C cable that came with your AIR NEO. If you purchased the AIR NEO Power Bank, simply slide your AIR NEO into it until you see the red Battery Indicator Light turn on. When the light turns off your AIR NEO has been fully charged. 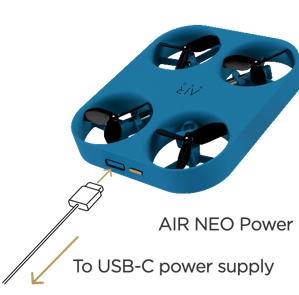 To turn your AIR NEO on press and hold the Power Button on the side of the device next to the USB port down for a second or two. 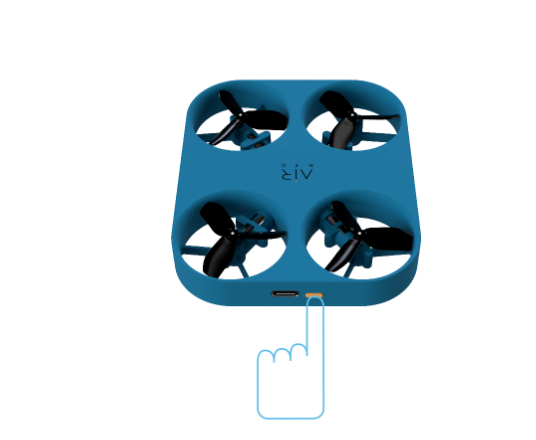 The blue Function Indicator Light will flash rapidly when your AIR NEO is powered up.

Your AIR NEO connects to your smartphone through a 2.4GHz wi-fi connection.

Select AIR NEO from the menu 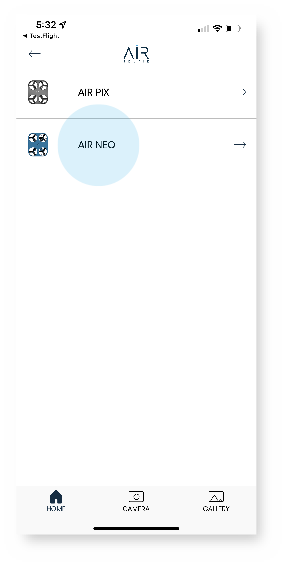 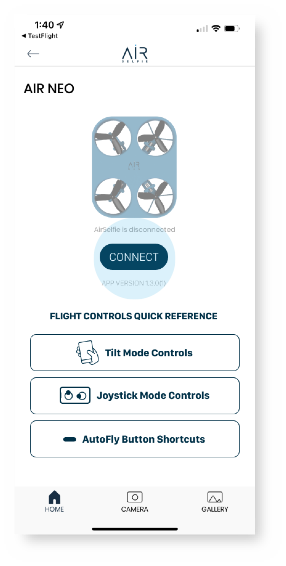 In the Settings app select Wi-Fi 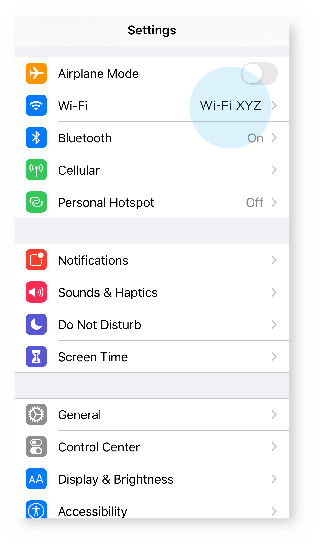 Select Airneo-XXXX (each AIR NEO has its own ID) 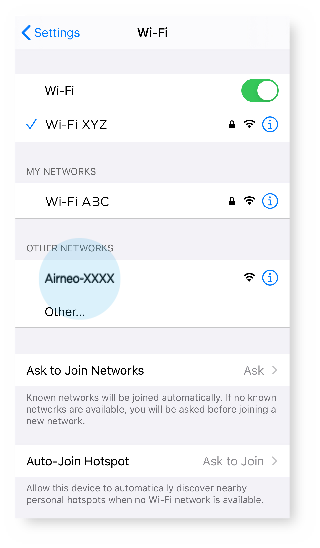 Check wi-fi has been connected 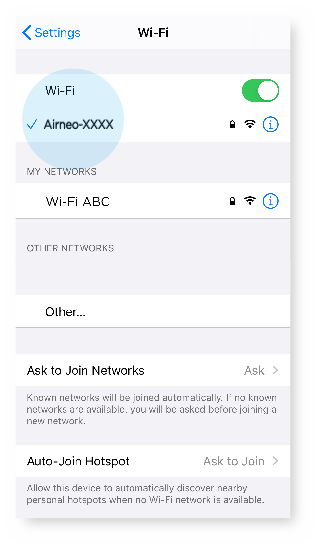 When completed, return to the AirSelfie app.

After completing the Set-Up process to connect your smartphone to your AIR NEO you may see the screen below informing you that a firmware update is needed. Firmware Updates are an easy two step process.

Simply press the UPDATE FIRMWARE button on the bottom of the screen. 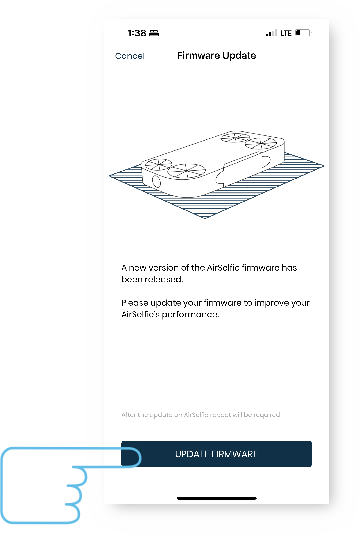 After a few minutes you will see the screen to the right. Press the DONE button and restart your AIR NEO. 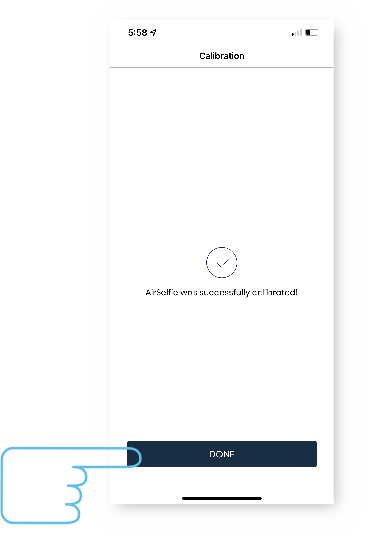 Relaunch the AirSelfie app. From the camera screen you will be asked to SELECT AN AIRSELFIE. Go through the AIR NEO to smartphone pairing process as before. 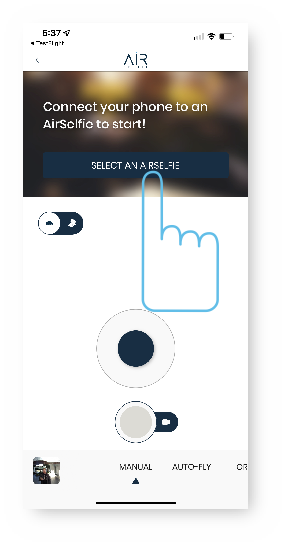 It is important that you calibrate your AIR NEO the first time you connect to your smartphone, and when operating at a different location. 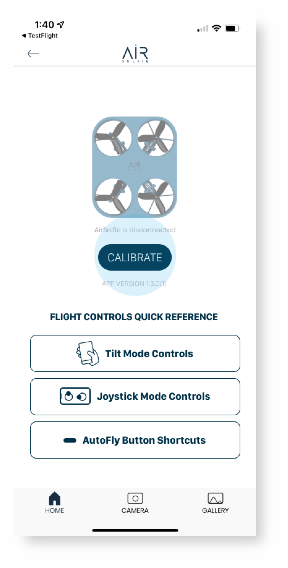 With the device on a flat, level surface - press Calibrate 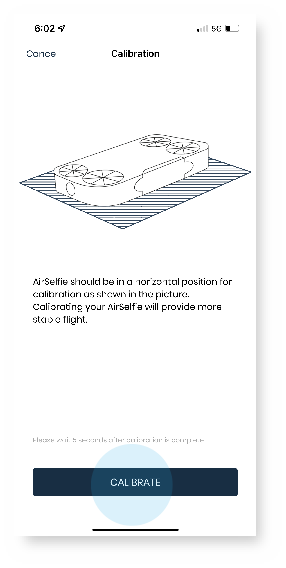 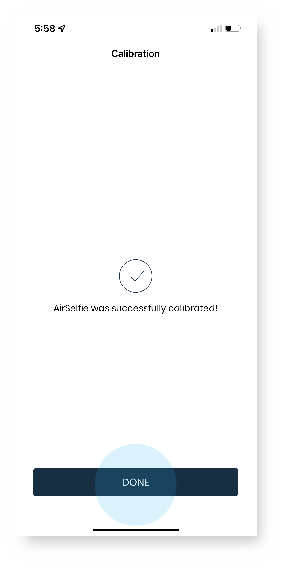 the icons on the bottom of the screen. Use the “Home”, “Camera”, and “Gallery” buttons to navigate between these main interaction areas. You may easily return to the previous screen by selecting the “back arrow” at the top-left corner of the screen at any time. 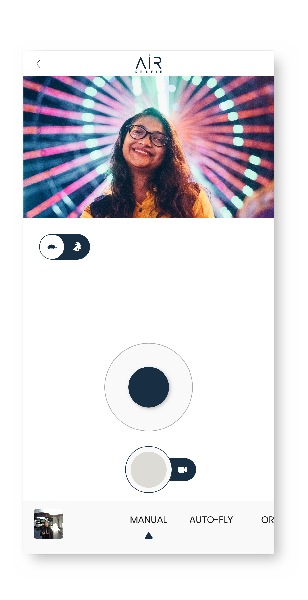 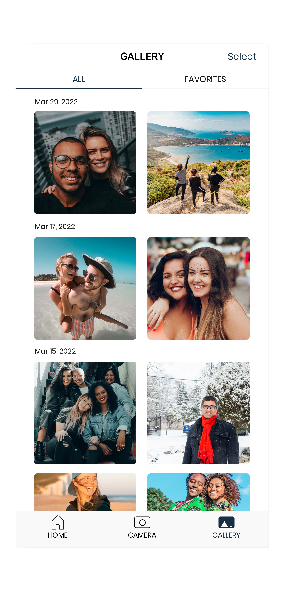 There are many ways to fly your AIR NEO... with or without your smartphone! In the AirSelfie app go to the Camera screen and scroll left or right along the bottom to line up the mode you would like to fly in with the blue arrow.

AutoFly Modes: At the touch of a button AIR NEO launches, flies a few feet away and finds you, takes a selfie or video and comes back to you all on its own. You can select the number of pictures AIR NEO will take when in photo mode.

Orbit Mode: AIR NEO will launch and automatically find you - then capture a video as it flies in a 8’ (2.5m) circle around you.

360 Mode: Want to capture an awesome 360° video of the world around you? Use this mode to launch AIR NEO automatically. AIR NEO will rotate in place, capturing a short video.

You can also fly without being connected to your smartphone:

Manual Mode - Gyro Control: Pilot using the gyroscope in your phone and simple swipes of the app joystick

Your AIR NEO can take photos and videos of you while you stay completely immersed in your activities in the AutoFly mode. Just follow these simple steps: 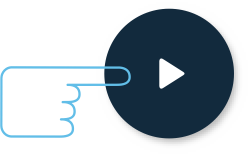 8. Gently toss the device in front of you as shown and AIR NEO will take flight automatically.

Tip: A gentle toss is all that is needed to launch AIR NEO. Too little or too much force may result in abnormal flight.

9. Your AIR NEO will then fly a few feet in front of you taking either continuous video or the number of selfie photos you selected.

10. In Video Mode the blue Function Indicator will remain illuminated while the charging light will turn red when a face has been detected and recording begins. The red light will disappear when recording has stopped.

11. In Photo Mode the blue Function Indicator will remain illuminated while the charging light will blink quickly red three times when a face has been detected and the capture countdown has begun. Then the red light will slowly blink with each photo that is being taken. The red light will disappear when photo capture has stopped.

13. After AIR NEO has taken either video or the number of photos you selected it will begin to fly back towards you.

14. Raise your hand to chest level to allow AIR NEO to land in your palm. Note that when outdoors or in dimly lit areas, AIR NEO may need you to reach out a little for a safe landing.

Launch, fly and take stunning HD Selfies & Video without even being connected to your smartphone. Capturing great moments has never been easier - here’s how: 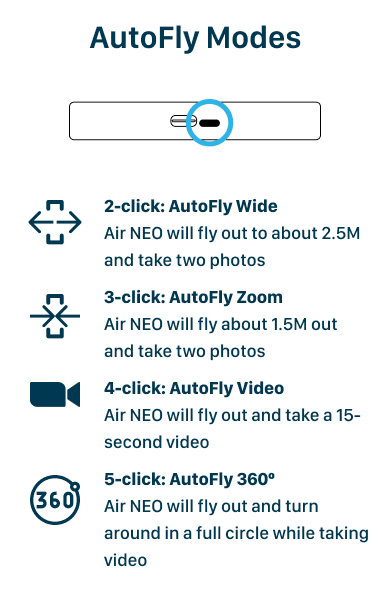 3. Just like in the AutoFly mode, place the AIR NEO on your open palm keeping it flat and parallel to the ground with the logo up and the camera pointing at your face. Gently toss the device in front of you as shown, and AIR NEO will take flight automatically.

In addition to AutoFly and app-free flight, AIR NEO may also be flown manually through the Control-Camera screen.

AIR NEO uses the gyroscope in your phone to control AIR NEO in flight. Keep your thumb on the joystick to activate control and tilt your phone in any given direction you want AIR NEO to fly:

Dip down for camera forward flight

Tip up for backward flight

Tip: Use the Control Reversal button to change camera orientation from Selfie to Perspective controlled flight. 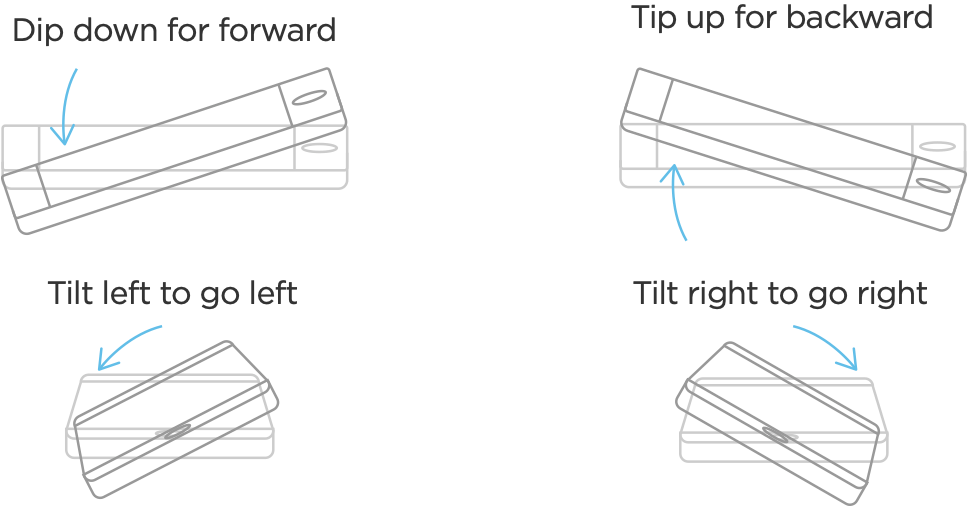 Tip: To stabilize a seemingly out of control flight take your finger or thumb completely off the Joystick. AIR NEO will then go back to a steady hover. Be sure to move your thumb and steady, as swiping too fast may result in erratic flight.

Beneath the Joystick there is a thin blue circle with the Photo/Video switch on the right side. Press the button to toggle between Photos capture and Video recording. 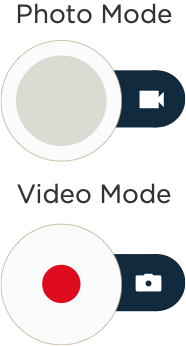 AIR NEO may also be controlled like a traditional RC aircraft for those that want a more videogame type of experience. Use the Phone Orientation button to change from Gyro to Landscape RC layouts.

Note: Landscape RC control does not use your phone’s gyroscope to fly. You may still select Selfie or Perspective controlled flight in this view.

An Auto-Safe Landing function automatically lands AIR NEO gently and safely if the device is low on battery or in case of loss of control.

To manually and instantly turn AIR NEO off in mid-flight simply grab the device with your hand (be careful to avoid the propellers) and flip it upside down. AIR NEO will automatically shut off and the propellers will immediately stop rotating.

Was this article helpful?
Yes
No